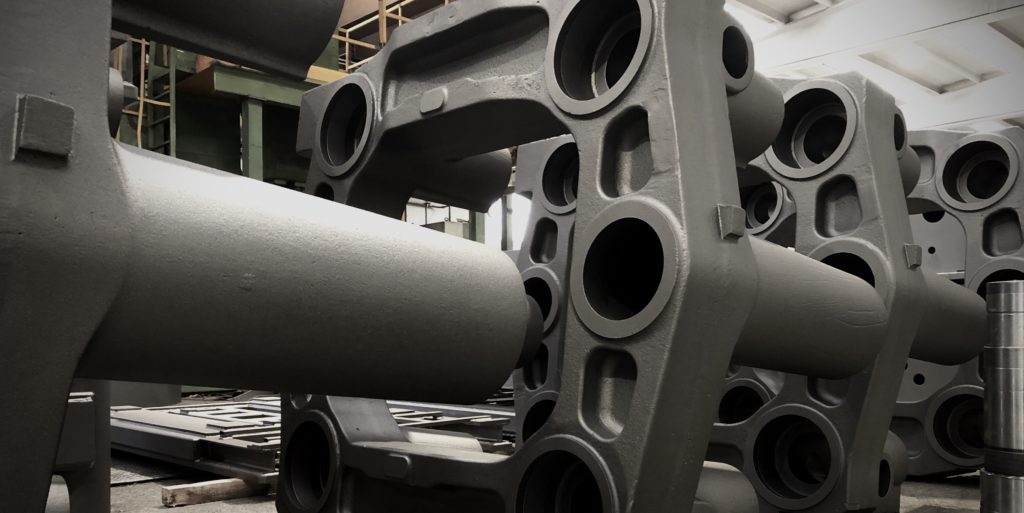 F.lli Temponi does heat tratments on carpentry and cast iron structures of any dimensions. The furnaces and their management and checking instruments guarantee the accuracy of the imposed thermal cycle and its complete traceability, even by remote, of the treated pieces.

By the factories in Nave we do:

The check of every heat treatment cycle is assigned, more than the electronic monitoring traditional systems, to a sophisticated software that notices, registers and stores all the done cycles.

Shot blasting is a surface treatment done with different machines according to the dimension, shape and material of the particular. In fact, we have many blasting machines: hoist blasting, carpet blasting, cluster blasting, tunnel blasting and in chambers

Painting is done by spray in cabin whit epoxy primer, by solvent or in water, nitro primer, inorganic and epoxy zinc primer.

In our factories there is a chain plant for immersion or diving painting with water products. The colours are required by the customers. To respect the health safety and environment and thanks to the help of specialized and reliable partners we have introduced in our painting cycle “water base” epoxy products in stead off “solvent base” drastically reducing the emissions of volatile organic compounds without modifying the quality. Quality is also guaranted by the use of the most recent and sophisticated painting plants and with control systems with head catalysis. Specials digital thickness detectors make the check of the thickness applied.

The starting point for an in-depth analysis of the problem concerning the heat treatments of parts with rooms that are not suitably drilled comes from the fact that actually happened within our company. The heat treatment of a 172cm-long hollow metal cylinder with a diameter of 17.5 cm that was not properly equipped with vent holes by the manufacturer caused the pipe to burst, damaging both the load and structure of the oven.

Approximating the damage, which was fortunately only materials, the priority remained the investigation of the cause of the explosion in a heat treatment performed in air (without a controlled atmosphere and without the presence of fuel gas or explosive mixtures).

The fact:
During annealing in the oven at 580°C, there was a break in the furnace at various locations with damage to the internal walls leading to the break-up of an area. In particular, serious damage occurred to a roller that had lost two plugs with an end that splayed like a daisy for more than half of its circumference.

Reflecting on the event
Based on the observations of the damage to the pipe and that of the oven shown in the photos, which in any case lead to an increase in pressure inside the roller present during annealing, the event may have been caused by:
1- Presence of explosive substances,
2- Explosion of gas mixture (gas, vapours, mists),
3- Burst upon reaching maximum pressure caused by the presence of liquids inside the tube,
4- Presence of reactive substances

A study performed by specialists in analysing the damage caused by explosive phenomena has shown that the most probable cause is that of point 3. Below is an excerpt from this study where the causes of the event are listed in detail.

To understand how the accident could have occurred with the damage to the annealing tube and the annealing furnace, we report the series of events that are likely to have occurred:
the tube contains liquid and/or powders casually inside

Recommendations:
– Absolutely avoid closed chambers inside the parts which must undergo high temperature heat treatment.
– It is an obligation for all designers to be aware of the danger and to check that buildings with closed rooms are not delivered for heat treatment.
Bibliography and references:
[1] Technical report on damaged hollow cylinder – Ing. Nicola Mazzei